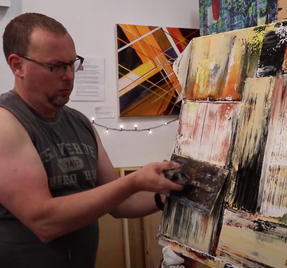 When I was 10, my parents split and later I came to realize the injustice of the court system applied to dad’s limited ability to reach his kids due to an unjust divorce settlement. It was further enhanced by my crazy mother raising us instead of my rational father. I really identified in my art later with injustice and how to expose that as well as deep pain related to forced isolation and separation by the state.

My art reflects these pains as well as the drama of trying to work with a mother that suffers borderline personality, where everything is a conspiracy against her and disrespecting others just to get her way or overreacting and literally raging against people in 15 minutes over trivialities. My art reflects this pain and irrationality of this condition. She still denies there is a condition even, so I cut her off after 45 years of trying to reconcile her insanity.

​Another impact was seeing Poland falling apart under communism in 1989. It was a real eye opener to the lies a state can tell and the dangers to its citizens living under dictatorship. My Political Pop style is at the core of these realities that go unspoken out of fear by its citizens.

I discovered my love of art in college at Indiana University.   I got into my first exhibition at Indiana University East.  I studied 3 years in art and art history before changing majors since I thought there was no future in it.  The school didn't teach anything about marketing art then.

One of my first paintings "The Eye" I gave to a close friend, who threw it out with the trash when moving. I had spent a week on that work, all to end in the trash to save space. I thought what is the point of painting?

By the time I moved out of the country, I stopped painting altogether for over 10 years. What was the point?  Ten lost years of painting.

Then I discovered I could sell on eBay and sold my first painting.  Unfortunately, the glass cracked scratching my very first sale.  I refunded half the payment to maintain my eBay rating.  By the next year, I sold over 40 paintings on eBay. To date I have sold over 225 paintings.

Later I launched my first store front at Active Space painting and open for business.  Unfortunately, this led to no sales, but my friend Prabin Badhia, a great figurative artist, encouraged me to join 4th Street Studios, where I sold my first painting as soon as it dried for $1200.  I went on to found the 2nd version of the gallery at 4th Street Fine Art.  At this gallery, I sold the very first painting in the gallery.  I later worked at Salon D'Art selling art in multiple Ritz-Carltons and getting promoted to Art Advisor Manager.  My continual training course led to all 6 Ritz-Carlton hotels to record art sales.

I have now done art shows in Los Angeles, New York, Miami, Dallas, San Francisco and Berkeley and shipped art to Japan, Philippines, UK, Spain and 13 US States. I have studied PIcasso, Hieronymous Bosch and Velasques in El Prado and Islamic and European architecture in over 11 European countries and 4 American countries. Let me drive your collection with my continually changing styles and thought provoking art.

This is Art of the Real.
FAQ
SHOP