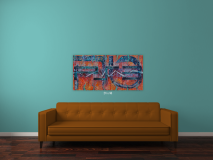 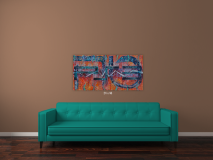 The reason for the attack was Sony reducing the functionality of the PS3 already sold in market. GeoHolz created a "hack" to jailbreak the PS3 to allow the original functionality of the PS3 to use Linux. Sony then sued Geoholz and all the users downloading this hack/patch to the PS3. Anonymous hackers struck back and took down the Sony Network for 23 days. They left code saying "We are Legion". Sony claimed 77 million credit cards were stolen while the hackers proclaimed no numbers were stolen. This was the largest and longest hack in history to date.

We do not forgive

We do not forget

The hack took 23 days based on the conspiracy of 23, a famous German hacker film. The phrase "We are Legion" comes from Mark 5:9 in the Bible referring to Jesus talking to the possessed. Legion refers to multiple demons. The symbol 5:9 and 23 are prominent in the painting.

Shipping: This ships in about 10 days from USPS, UPS or Fedex. Shipping in US is $200 and $400 in Canada. For other countries, contact me for custom invoice.